The General Chapter of the Institute of the Eucharistic Heart of Jesus was held between Friday, September 10th and Wednesday, September 22nd , 2021. It was indeed a solemn and reawaking period in the life of the Institute, having as the theme “Renewing the Face of the Earth as A Great Missionary Power in the Church”.

The Capitulars of the General Chapter of the Institute of the Sisters of the Eucharistic Heart of Jesus gathered together on Monday 20th of September, 2021 and elected Rev.  Sr.  Dr.  Mary Fausta Manafa, EHJ as their Superior General for a tenure of Six years.

The New Superior General of the Institute Sr. Mary Fausta Uche Manafa had her first profession of vows on August 15, 1985 and her final profession of vows on September 1, 1991. She has a Bachelor’s degree in English / Education, Master’s and Doctoral degree in Sociology of Education. She is a seasoned educationist and has served the Institute as Principal and other head of schools in the Institute. The General Chapter of 2003 elected her a member of the General council, while that of 2009 elected her as the Vicar General. She was until her election as the Superior General, a lecturer at National Open University of Nigeria.

The election at the General Chapter also brought in four others, Sr. Therese Marie Afareha as the Vicar General, and Sr. Elizabeth Maris Agent-Itopa, Sr. Mary Francisca Elewodope and Sr. Catherine Maris Oparaji as General Councilors to shoulder this responsibility for the next six years with the Superior General. 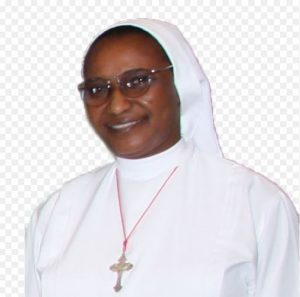 Rev.  Sr.  Theresa Maris Afareha, EHJ
Sr. Theresa Maris Afareha was elected the Vicar General of the Institute. She worked at Health Services / HIV & AIDS Department. She is the Health Coordinator of Lagos Archdiocese. Sr. Theresa is a Registered Nurse/Midwife. She was the Regional Superior of the South West Region of the Institute before her election as the Vicar General.

Rev.  Sr.  Elizabeth Maris Agent-Itopa, EHJ
Sr. Elizabeth Itopa-Agent is currently the Principal of Sacred Heart College Apapa. She has been a member of the council in the last administration and elected a second time as a councilor. She is also a seasoned school administrator. 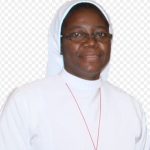 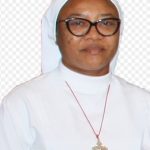 Rev.  Sr.  Catherine Maris Oparaji, EHJ
Sr. Catherine Maris Oparaji is also a member of the Institute’s General council. She is currently the Principal of Eucharistic Heart of Jesus Model College Ibonwon in Epe, Lagos State.She is a seasoned educationist and has headed many of our Primary and Secondary Schools.

The Closing Mass of the General Chapter which was on the 22nd of September was celebrated by Msgr. John K. A. Aniagwu, the Vicar General of the Archdiocese of Lagos. He equally represented the Chief Shepherd of the Archdiocese, Most. Rev. Dr. Alfred Adewale Martins on the occasion.

The Thanksgiving Mass had a good number of the EHJ Sisters present, as well as the General Chapter Moderator, Sr. Olivia Umoh, D.C, Very Rev. Fr. Vincent Olofinkua, the Provost of St. Augustine’s College of Education Akoka, Lagos, the Associate members of the Institute, friends, staff, well-wishers and family members of the Sisters. The joy of the election’s outcome will remain indelible in the hearts of all as they all wish the new leadership team a successful tenure of office.

Photos from the celebration: 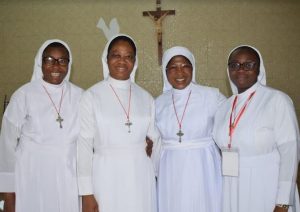 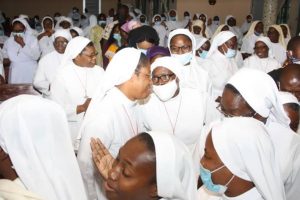 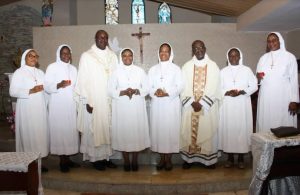 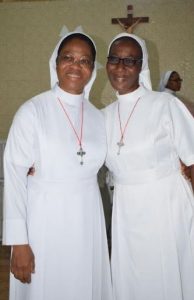 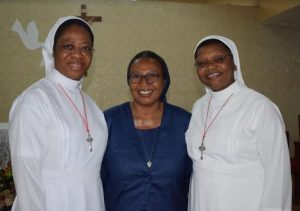 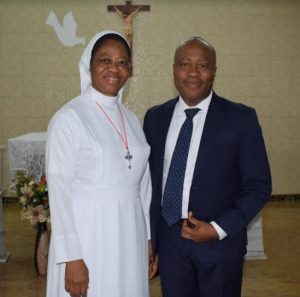 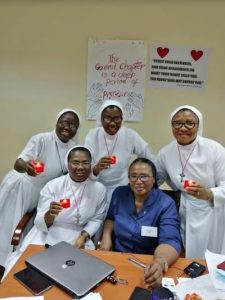 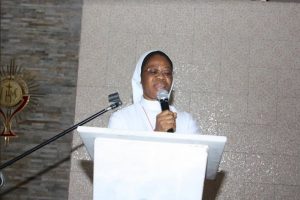 Tags: General Chapter of the Institute of the Eucharistic Heart of Jesus Renewing the Face of the Earth as A Great Missionary Power in the Church REV. SR. DR. MARY FAUSTA UCHE MANAFA THE NEW SUPERIOR GENERAL

From the Superior General

You will find therein the rich legacies, the different activities, apostolates, projects and spiritual commitments of our Institute. I employ you therefore to join us in the new evangelization and in the task of Renewing the face of the Earth as A Great Missionary Power in the Church. Our doors are open to cooperating with you in this work of evangelization. May God bless you now and always Amen.